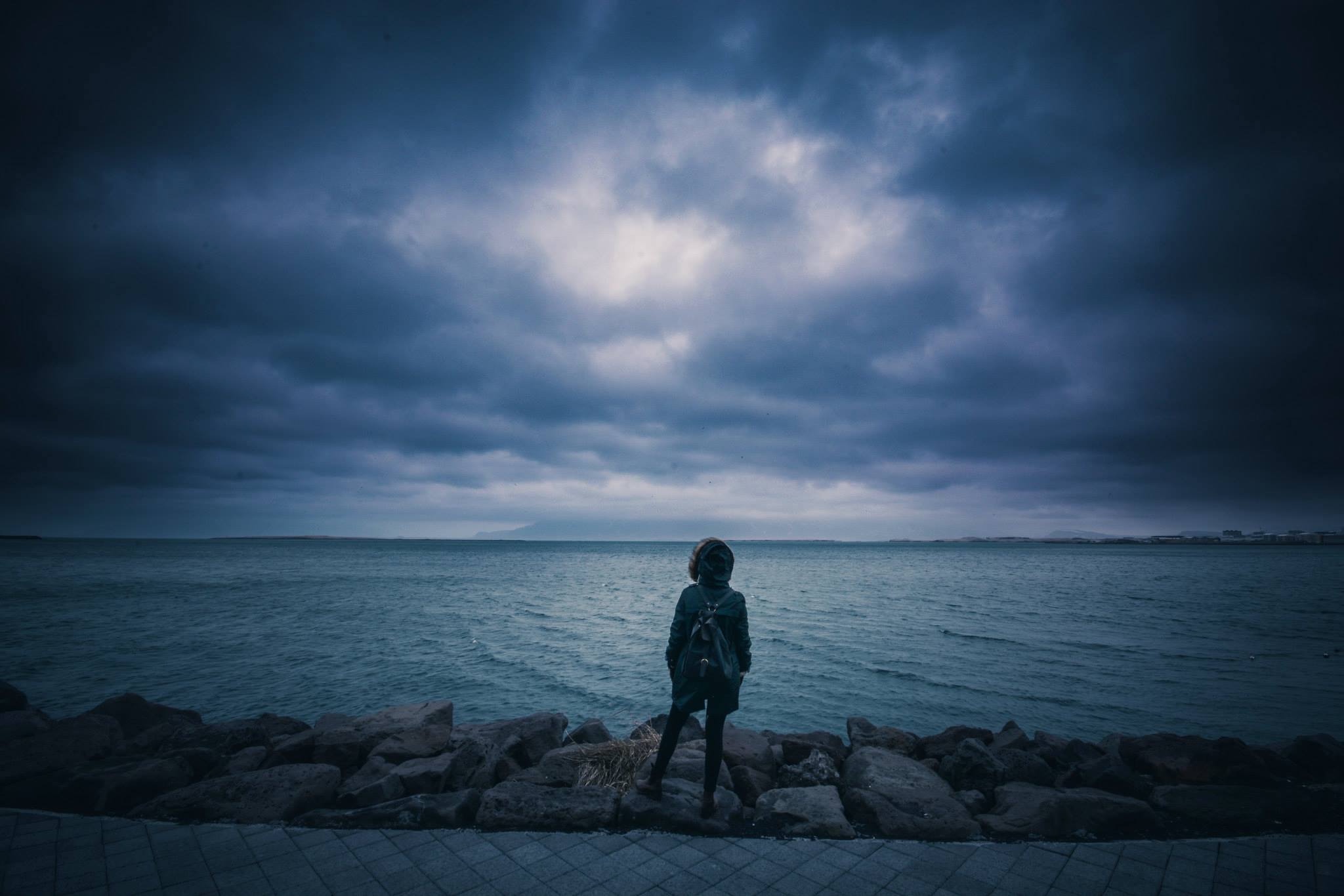 How I Found Peace In The Storm Of Anxiety

A year ago today, I had an anxiety attack in the happiest place on Earth.

Lauren and I were in Orlando for a conference and were looking forward to an adventurous, all-expenses-paid tour of Epcot.  Lauren, far and away the Type A, detailed-oriented planner of our family, had done hours of research online and developed a strategy for our day in the park.  She’d gone so far as to create her own map that plotted out the specific dishes and drinks she wanted to sample at each of the park’s “countries.”

As our bus approached the park in the rain, I could palpably feel the excitement radiating off of Lauren.  Epcot had no idea what was about to hit it.  (Once in college, Lauren defeated a bunch of frat dudes in a pizza-eating competition in which the participants had to polish off a large pie, ten breadsticks, two dipping sauces, and two Cokes.)

Lauren literally galloped through the park.  I, on the other hand, was growing more and more agitated with each stop, although I couldn’t figure out why.

Maybe it was the Florida humidity or the steady eating and drinking everywhere we went or the fact that I’d been reading The Catcher in the Rye that week and, like some 34-year old version of Holden Caulfield, was getting increasingly annoyed with all the phony store fronts.

Or, more accurately, it was the fact that, for an entire year, I’d been rolling a personal and professional slump I thought I was in into a big, angst-y meatball of emotion without telling a soul.

I had plenty of supportive friends and mentors who I could turn to who had more than earned the right to be heard in my life, but somewhere along the line, I subconsciously decided that I’d rather navigate through my junk alone than let anyone know that I had some real fears about the future and insecurities about myself.  I was being pretty prideful, in retrospect.

My mind had become a breeding ground for anxiety, which would vent itself occasionally in my life in the form of edginess, defensiveness, indecisiveness, laziness, and confusion.

That night back at our hotel, Lauren innocently asked me a simple question over dinner that sparked a hidden, year-long fuse…

“Has being here inspired you to stay where you are or look elsewhere?”

Without warning, the room immediately felt smaller.  My eyes started to well up uncontrollably.  My legs bobbed up and down underneath the table.  A bomb was detonating in my mind and there was no stopping it.

“Did I say something wrong?” Lauren asked cautiously.

“I have no idea what’s going on right now,” I mustered, “but all I want to do is go upstairs and crawl into bed with all the lights off.”

Up to that point, I thought people who claimed they were having an anxiety or panic attack were just being dramatic.  “Oh, come on.  Pull yourself together,” I’d think ignorantly, judging them.

It turns out that, no, anxiety attacks are the real deal and they are horrible.  (I’ve only had that one, but my heart goes out to those people who fear when the next one will strike on a daily basis.)

After a solid 15 minutes spent trying to process things with Lauren back in our room, I reluctantly went to a late-night rehearsal for a skit that I would be a part of with two friends and colleagues on the final day of the conference.  These friends were some of those supportive friends I mentioned earlier; they instinctively knew something was up.

“Everything OK?  You seem off,” one of them asked.

“Well…,” I started, having no idea how my words were going to sound, “I have no idea why, but I freaked out at dinner and was just in the fetal position upstairs.”

The three seconds of silence that hung between us felt like a year.

“Sounds like you had an anxiety attack,” the other assessed bluntly.  (Real friends can do that, especially those who struggle with anxiety themselves and whose husbands are therapists.)  “Do you have a counselor back home who you could talk to about it?”

Sometimes I hate how deeply the Truth has to cut me to get my attention.

Up to that point, I thought people who talked about going to a counselor were bragging to the world about all their issues.  “Here they go again.  When will they just get over it?” I’d think ignorantly, judging them.  Sound familiar?

It turns out, no, counseling is awesome (and, at times, really hard).  I’ve found that the real epiphanies don’t usually happen while I’m in the comfy leather chair at my counselor’s office, but in between my 1-2 sessions a month with him when I often don’t expect them (like when I’m brushing my teeth or in the car alone).

That entire day was just the first leg of a long journey; one that I’m still on.  I learned from my counselor and doctor that millions of people deal daily with anxiety.  The trick is learning how to cope with it healthily (which I admit I’m no expert at, but I’ve gotten much better at it than I was this time last year).

Though it was an experience I never wish to endure again, in an odd way I’ve become grateful for having gone through it.

Hopefully my story (again, one of millions out there) can give someone a bit of encouragement, hope, and solace.  You’re not a freak-show.  Help is out there.

To my friends Kelsey and Marlin:  Thank you for teaching me a year ago tonight what it looks like to be full of both Grace and Truth.

To my friends Jon, Jack, and Linda:  Thank you for generously sharing your experiences in counseling with me and giving me the encouragement to pursue health.

To my two wiser friends from church who individually pulled me aside and unknowingly gave me the same counselor’s number:  I believe God spoke through you to me in ways you may not have ever known.

To my counselor Patrick (and the earlier counselors who weren’t the right fit but helped me find the right one):  You’ve helped me become a healthier and more loving husband, dad, friend, leader, and believer.  Thanks for all the good coffee, too.

To my insurance company, employer (whose mental health benefits are amazing), doctor, and whoever invented Lexipro:  God bless you.  Seriously.

To Lexipro:  I’m glad we met.  Our 6 months together were memorable and I remain grateful for them.  I think it’s best if we remain civil, though, for the time being.  It’s not you; it’s me.

To my former self who loved what a stone felt like in his hand:  You and I both know that you were being an unnecessary asshole.

To my fellow Christians who quickly prescribe Philippians 4:6-7 to people dealing with anxiety:  Please do so carefully.  Or just don’t at all if it hasn’t been solicited.  What you may end up communicating is that you care more about fixing the person’s issue than the person him- or herself.  Maybe what they need most from you in their vulnerable moments is a listening ear and a hug.

To exercise, sleep, music, coffee, books, an occasional bourbon, and the sun:  You guys are great!

To anyone reading this who struggles bravely and imperfectly with anxiety, depression, and despair in ways the world can’t or, at times, chooses not to see, especially my young friends in high school:  I see you, God sees you, and you’re not alone.

To Lauren and Olivia:  The patience, love, hope, joy, and laughter you fill our home and my life with is the best medicine in the world.  Let’s do a do-over on Epcot together down the road!

Finally, to the Truth:  You’re amazing, I love you, and sometimes you really annoy me.  Please keep doing it.

Thank you, Ryan. Opening and sharing yourself is a brave step. Many of us have had our own experiences and journeys. We were not, nor ever will be alone. You, in this article, are our voice. I wish you, Lauren, Olivia and Gus a healthy and happy journey.

Thank you for sharing this…I still have panic attacks and anxiety. They started when I was 21. There is no “face” to anxiety and/or depression. It is scary (for lack of a better word) and it is real. And if it happens to anyone I urge them to get all the help they can get! It may never go away, as in my case, but it CAN get better. Just TELL someone.